Finally a tender film about psychedelics.

A very special documentary that shows how we can connect not with, but as nature, to the rest of nature.

This enchanting film shows us the value of psychedelics and mystical experiences for science and our humanity.

Seen through the eyes of Zenmaster Vanja Palmers, the world is one living organism. People, animals and plants are part of one big concioussness.

The A.I creations are a magnificent recreation of the psychedelic experience.

The tone of this film is pleasantly modest, but nevertheless very impressive and intellectually and spiritually tantalizing. Nevejan again developed an innovative and aesthetic new visual language for psychedelics, which puts her in line with a long tradition of filmmakers and philosophers, who see film itself, as a way to make the invisible, the transcendence and the (un) consciousness visible.

The most beautiful documentary I have seen about the science of psychedelics. Moving scenes in a magical mountain scenery, and two mystical main characters: A Zen master and a Neuro scientist.

When pioneering science feels like watching a true fairytale, you know you’re witnessing something very special. A fundamental step of re-introducing ,on the most stunning visual way, the mushroom on the highest levels of discourses.

This sweet story about the coming together of the brain scientist and the Zen monk is directed by the Dutch documentary filmmaker Maartje Nevejan, whose team of animators and special effects wizards add just enough bells and whistles to convey the subtle magic of the psychedelic state. Merely watching “Descending the Mountain” may increase the incidence of openness, optimism and mindfulness.

By fairylike animations and fantastic images of nature, the beautiful film visualises how consciousness and nature are entangled. 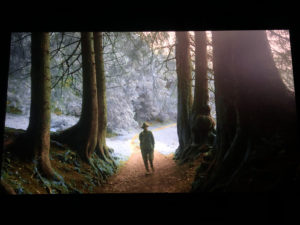