June 20th, Lapland, Finland: Screening Are You There?

With afterwards a Q&A with space scientist Esa Turunen, who also appears in the film.

The Midnight Sun Film Festival is an annual five-day film festival in Sodankylä, Finland. The festival usually takes place in the second week of June, but from June 14 to 18 in 2017. One of the main characteristics of the festival is to show films without a break around the clock while the sun shines around the clock. 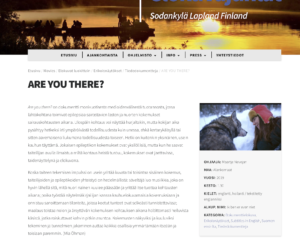 Tags: absences, are you there, If you are not there where are you